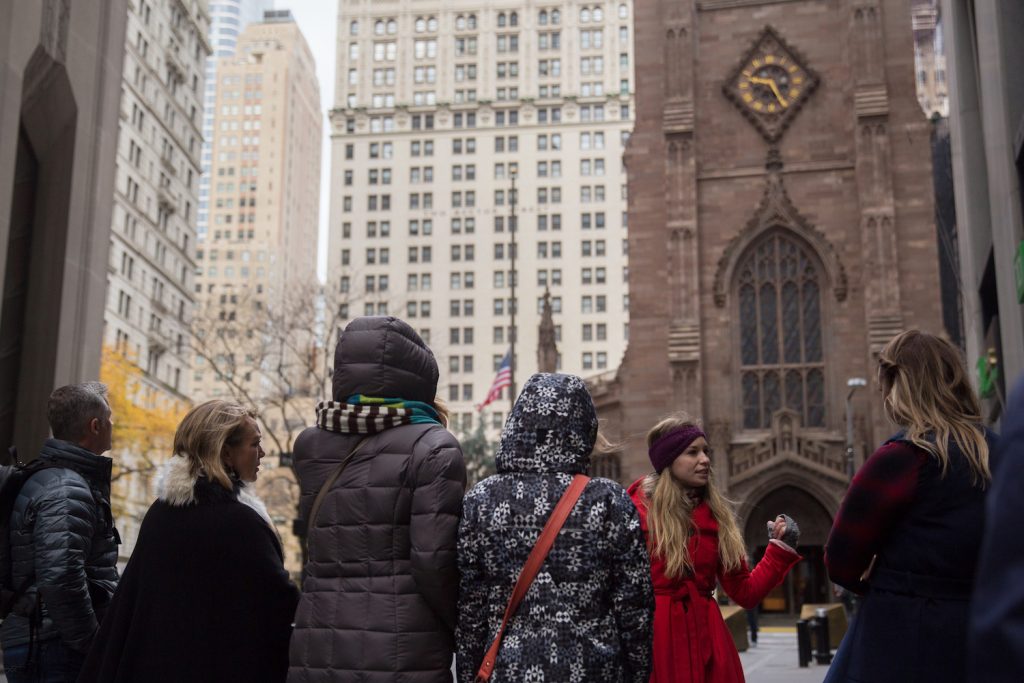 Trinity Church is one of the most famous landmarks in New York City, and fortunately for travelers, it’s an easy addition to any visit to Lower Manhattan and especially the Financial District.

In fact, it’s so central to this area that you’ll often hear it called Trinity Church Wall Street.

In this post, I’ll share a little about the church’s history, including its famous churchyard, and what you can see and do when you’re here. I’ll also share some of my insider tips as a Wall Street tour guide for visiting Trinity Church in NYC and nearby attractions.

This church played a pivotal role in U.S. history and the founding of the Financial District.

Today, you may recognize Trinity Church from the 2004 movie “National Treasure,” where a historian played by Nicholas Cage discovers hidden treasure under the church.

As far as we know, there’s no actual treasure under Trinity Church, but it’s not doing too bad, either. A lawsuit in 2013 revealed Trinity Church’s total assets to be around $2 billion, stemming from its ownership of 14 acres of Manhattan real estate, including 5.5 million square feet of commercial space in Hudson Square. Its endowment makes it one of the richest parishes in the world and one of the largest landowners in Manhattan.

Trinity Church was founded in 1696 when a small group of members of the Church of England petitioned the Royal Governor Benjamin Fletcher for a charter granting the Anglican church legal status.

Fletcher granted the charter in 1697, and the first Trinity Church was erected at the head of Wall Street facing the Hudson River.

Although Anglican services had been held in the colony’s fort chapel, the building was the first Anglican church on the island of Manhattan.

Trinity was then granted by Royal Governor Fletcher a six-year lease on a tract of land north of its location known as the King’s Farm.

The royal governor also authorized a 1696 patent stating that all shipwrecks and drift whales that wash ashore in New York Harbor become property of Trinity Church. This document became known as the “Whales and Wrecks,” where the government officially recognized that the church could take advantage of pretty much any kind of benefit. After all, whales and shipwrecks were potentially a considerable source of income.

The land grant was made permanent in 1705, by Queen Anne giving the church a total of 215 acres. Looking at Manhattan today, the land grant stretched from modern-day Fulton Street north to Christopher Street and from Greenwich Street (which at the time, abutted the Hudson River) east to Broadway.

Here’s something you wouldn’t expect. The infamous Captain William Kidd assisted in the construction of Trinity Church.

Before the Scottish sailor was arrested and executed for piracy, he lent the church’s builders the runner and tackle from his ship to lift the stones needed for the church’s foundation and walls.

What (and who) to see at Trinity Churchyard

A visit to the churchyard should be on every visitor’s itinerary. The church and churchyard are open 8:30 a.m. to 6 p.m. daily, so it’s easy to stop by as you’re touring Wall Street.

Many famous people are buried in the churchyard, including two of New York City’s most influential individuals, Alexander Hamiliton and Robert Fulton.

Fun fact: Visitors and even some Wall Street traders toss pennies on his grave, believing it will bring them good luck.

The Hamiltons are joined by many other notable individuals whose lives helped shape the founding of the United States, the rise of Wall Street as the financial capital, and the dominance of New York City as the global trading center.

Robert Fulton might not be as famous as Hamilton, but the inventor and engineer of the first successful steamboat ushered in a change that would later revolutionize trade.

Instrumental in constructing a steamboat named the “Clermont” and parlaying it into a commercial success with the first permanent commercial route in history on the Hudson River, Fulton was backed by Chancellor Robert R. Livingston with all his financial and political influence.

Also buried at Trinity Church is Albert Gallatin, the founder of NYU, a member of Congress, and Secretary of the Treasury under Thomas Jefferson.

The only signer of the Declaration of Independence buried in Manhattan, Francis Lewis is also here along with several delegates to the Continental Congress, including Walter Livingston, John Alsop, Luther Martin, and John Morin Scott.

The oldest burial in Trinity Churchyard — at least, that is documented by a legible headstone — is that of Richard Churcher, who died in 1681 at the age of 5. This is notable because Trinity Church wasn’t even founded until 1697, highlighting the fact that the north churchyard, in particular, had long been used as a burial ground, even before Trinity purchased it.

The peppercorn plaque at Trinity Church

Along with the churchyard, there are a few unexpected sights at Trinity Church to keep an eye out for. One of my favorites is a plaque right at the main entrance.

It says in Trinity Church’s charter that it and all the rights, properties, and privileges described therein would be granted to us provided we pay King William III and any of his heirs or successors a yearly rent of … “one peppercorn.” And yes, this is a peppercorn like those used in a pepper grinder.

If that sounds odd, in legal parlance, the term “peppercorn” is often just a metaphor for a very small payment, something to bind a legal contract and often not to be taken literally.

And this seems to be the case with Trinity Church because it doesn’t appear they ever actually paid a yearly peppercorn in rent. Until, that is, when Queen Elizabeth visited Trinity Church in 1976 and the then-rector, Dr. Robert Parks, presented Her Majesty with 279 years of back rent in the form of 279 pepper corns.

Queen Elizabeth II accepted this symbolic gesture on the front steps of Trinity Church, where a plaque commemorates the event.

Can you visit inside Trinity Church?

Note that although both the church and churchyard are open to guests, a security check is required for entry.

When you check the visitor’s page of the Trinity Wall Street website, you’ll notice they list information for another historic NYC church: St. Paul’s Chapel. The two sister churches are indeed related.

It all goes back to the 18th-century.

By 1750, the population of New York City had more than doubled. Services in Trinity Church were packed, and the church decided to construct its first chapel-of-ease for its increasingly far-flung communicants.

St. Paul’s Chapel most famously hosted George Washington, who went to service there on the date of his inauguration in 1789. St. Paul’s is now the only colonial-era church remaining in Manhattan and the oldest public building in continuous use in the borough. It celebrated its 250th anniversary in October 2016.

It’s also famous for miraculously surviving 9/11. If you’re interested in learning more about St. Paul’s Chapel, it’s the first stop on our tour of Ground Zero.

The soaring steeple — which reaches 281 feet, making the church the tallest building in New York City until 1890 — and Gothic spires above pointed arches make Trinity Church a pleasant stop even if you’re just walking outside.

Today, Trinity Church Wall Street is considered one of the first and finest examples of Neo-Gothic architecture in the United States. The current structure is actually the third church built on the site, consecrated in 1846.

The first Trinity Church building was destroyed during the Revolutionary War in what became known as the “Great Fire of 1776.” Some suggest that the church was the prime target of patriots since the church was viewed as a loyalist stronghold.

Historical note: Coincidentally, St. Paul’s Chapel was saved by a bucket brigade that ran from the Hudson River up to the chapel’s roof. In fact, it was one of the few buildings that remained standing after the fire and acquired the nickname “miracle church.” The nickname would later become well known after the church withstood the September 11th attacks with little damage.

After the war Trinity and all Anglican churches in the former colonies legally separated from the Church of England and became the Episcopal Church.

The year following the inauguration of George Washington as president in 1789, the second Trinity Church was completed. This church faced Wall Street and was both longer and wider than the first. The new steeple soared to a height of 200 feet.

President Washington and members of his government were regular worshipers in the new Trinity building during the brief period New York City was the capital of the United States. Notable parishioners included John Jay and Alexander Hamilton.

In 1838, the support beams of the second Trinity Church gave way. Architect Richard Upjohn was hired to repair the building, but he recommended demolishing the structure and constructing a new church.

Trinity Church: A must when you visit Wall Street

Trinity Church is a must see spot during any trip to the Financial District. It’s just a few blocks from the New York Stock Exchange and the Charging Bull. I wrote a whole post about the best way to pose with the bull — there’s a strategy.

By the NYSE, visit the famous buttonwood tree or Federal Hall and the House of Morgan.And, of course, you can’t miss a tour of Wall Street while you’re here. Visit with an insider — someone who knows about the inner financial workings of the city from inside the trenches — and you’ll be amazed what you uncover.