Fraunces Tavern in NYC: Where Dining and History Meet 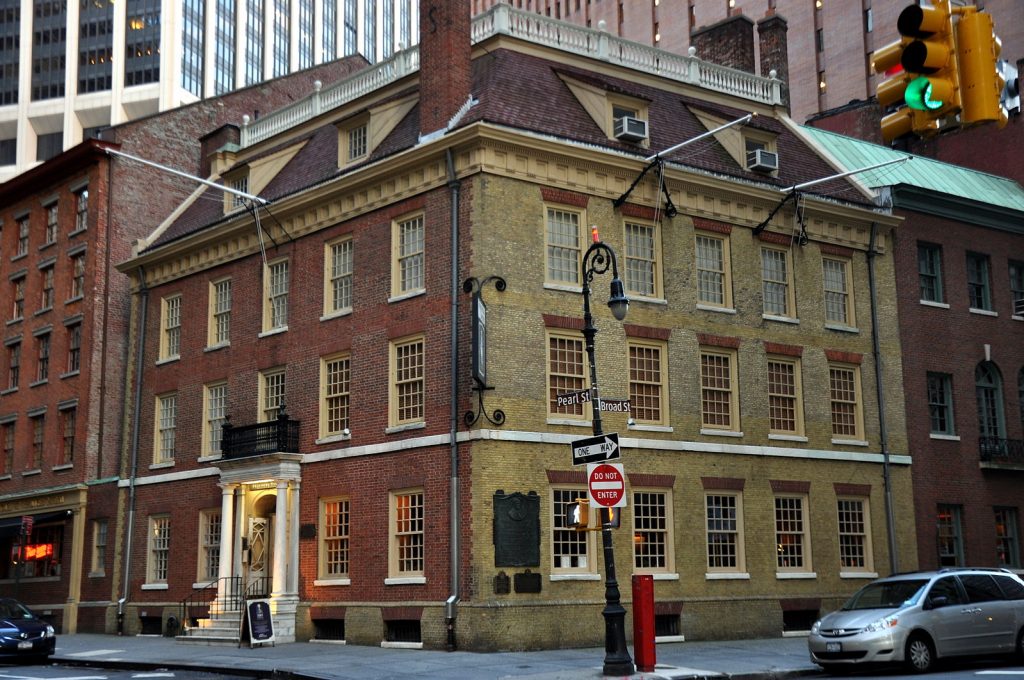 Sitting on the corner of Broad and Pearl Street, Fraunces Tavern is as unassuming as any average building in New York. Were it not for the three historical plaques posted outside, you’d probably have no idea that the building was even significant. Isn’t it just another restaurant?

Fraunces Tavern is indeed a restaurant, but it’s so much more. The tavern has more history than almost any other building in NYC since it’s been standing longer than most of them. It was a gathering place for patriots, politicians and others during the time of our nation’s birth.

Here’s everything you need to know about Fraunces Tavern and why you should visit next time you’re in New York City.

A Look Back in Time at Fraunces Tavern’s History 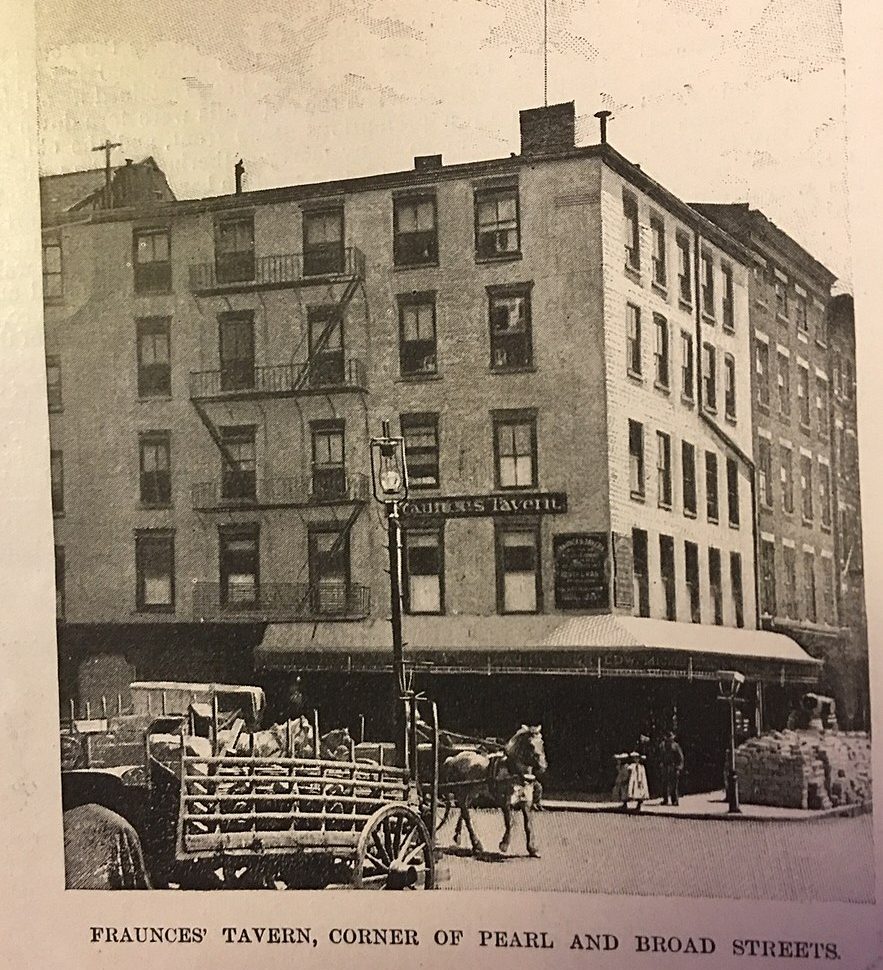 The ground at 54 Pearl Street was sold to one Stephanus Van Cordlandt in the 1680s, who then sold it to his son-in-law (Stephen De Lancy) in 1700.

De Lancey built a house on the property, rented the space as a dancing school, and eventually sold it to his sons for use in their imported goods business. As the company began to lose money, they were forced to sell the land to Samuel Fraunces in 1762.

Fraunces first opened the Queen’s Head Tavern in honor of Queen Charlotte of England. It became a center of the community and a hotspot for clubs and organizations.

Fun fact: The New York Chamber of Commerce was founded in the tavern in 1768.

During the Revolutionary War, the tavern was managed by Charles Campbell, Fraunces’ loyalist son-in-law. After the British surrender, weekly trials were held inside to grant freedom to enslaved Loyalists who joined the British Army in exchange for their freedom.

On Evacuation Day in 1783, as British troops left New York City, State Governor George Clinton celebrated at Fraunces Tavern. Just over a week later, George Washington met with officers of the Continental Army in the Long Room to give his farewell speech.

Fraunces Tavern After the War 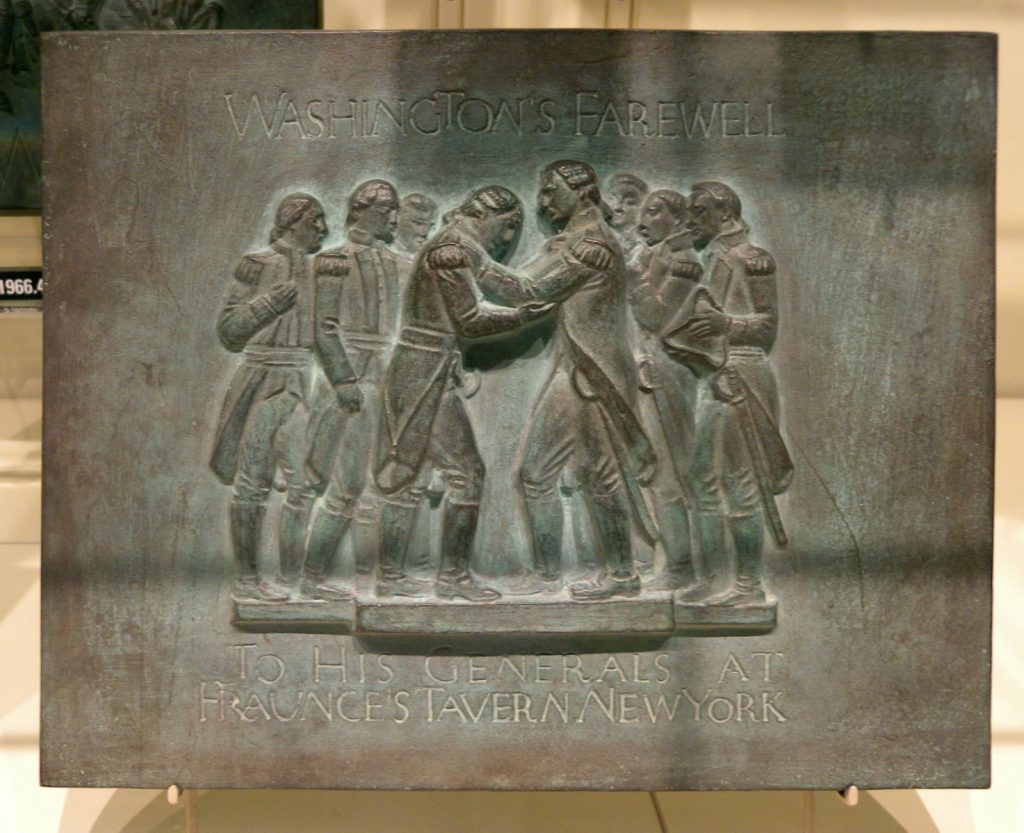 After the revolution, Fraunces Tavern became more administrative than entertaining.

The Continental Congress used the space as an office for the Department of Foreign Affairs, the War Department, and the Treasury. Food and drink service eventually returned when the Supreme Court celebrated its opening by dining at the tavern.

Meanwhile, the population of New York was growing by the tens of thousands. Dr. Nicolas Romaine acquired the building in 1795 and turned it into a boarding house, keeping the first floor as a bar.

In the years that followed, ownership continued to change. The building went from a boarding house to a grocery store, and the area around it continued to develop as more and more buildings were built.

A New Future for Fraunces Tavern

At one point, Fraunces Tavern was at risk of being demolished. The Daughters of the American Revolution fought to buy the building in order to save it, but eventually the city got involved and declared the property a park in 1903.

The Sons of Liberty stepped in and restored the tavern to its 18th century Colonial Revival appearance. It was then dedicated and reopened as a museum and restaurant on December 4, 1907 — the anniversary of Washington’s farewell address.

In 1965, Fraunces Tavern was designated as an official New York City Landmark, and in 1977 the entire block was named a Historic District on the National Register of Historic Places. 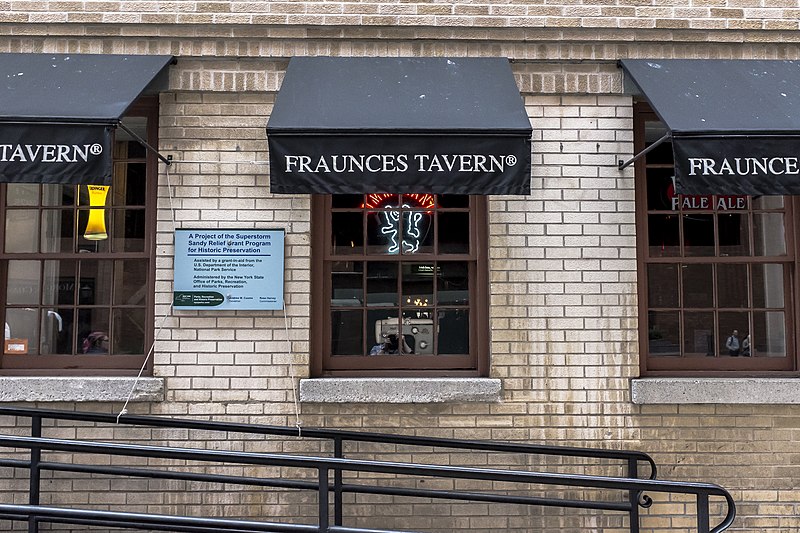 Still to this day, Fraunces Tavern serves as both a museum and a restaurant. Both are special in their own right and allow you to experience the building in different ways. 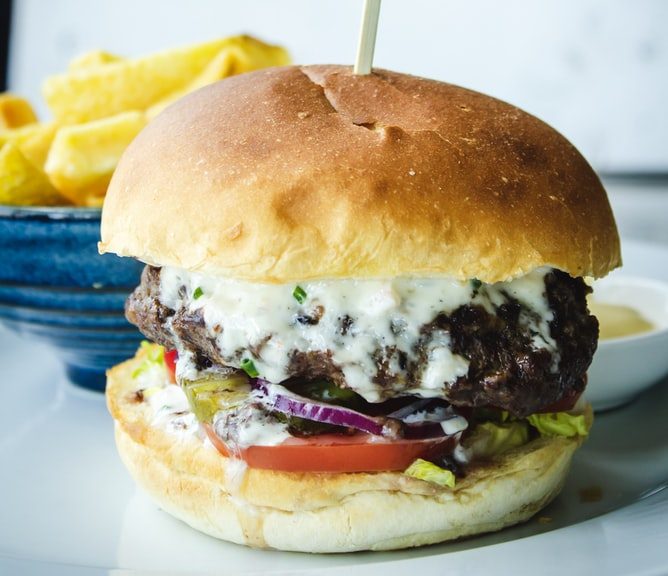 The menu at Fraunces Tavern consists of slightly upscale but fairly traditional American pub food. Prices are on the higher side, but there is a decent amount of options to choose from, including burgers, sandwiches, salads, steak, and fish.

One of the more unique dishes is the Filet Mignon on a Stone — a piece of steak that is served to you on top of a hot lava stone. But their most popular dish is the famous Chicken Pot Pie.

Like any decent tavern, the drink variety is impressive, too. Over 200 whiskeys are available as well as 130 craft beers, ciders, and a number of signature and classic cocktails.

The Fraunces Tavern restaurant is open 11 a.m.-2 a.m. daily. Reservations are recommended, particularly on weekends. Party rooms are also available to rent for those looking to celebrate a special occasion.

The Museum at Fraunces Tavern 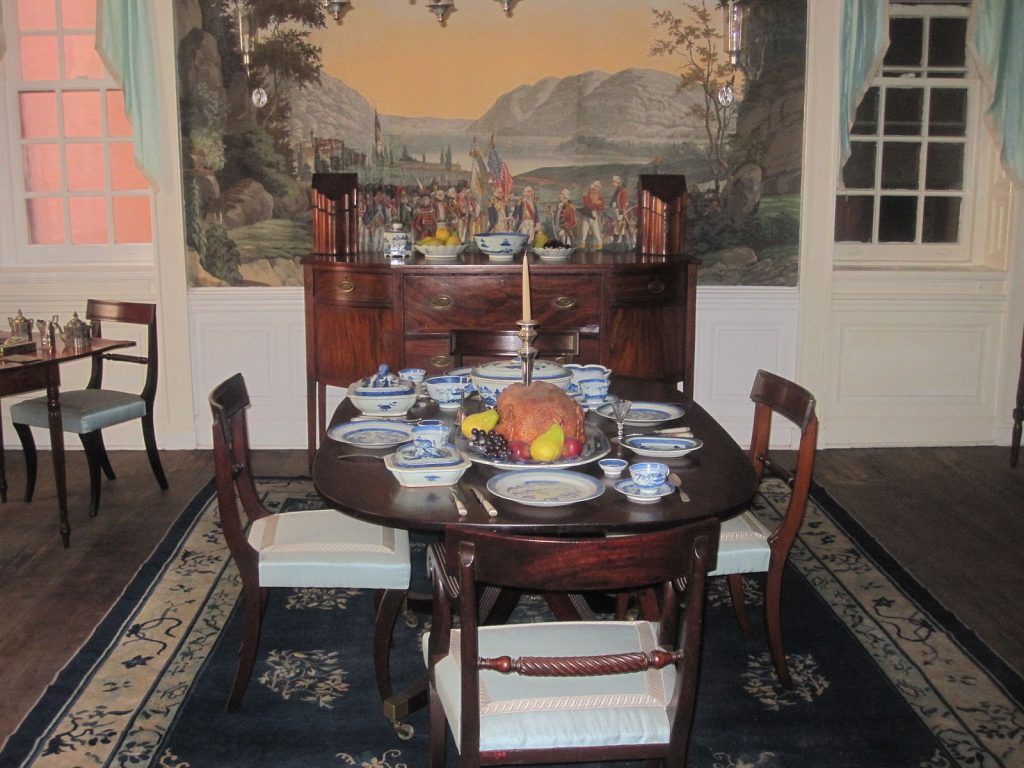 Above the dining room, on the second and third floors, is the Fraunces Tavern museum. The various exhibits and collections will take you through the history of the building and highlight some of its most significant moments.

The museum is operated by the Sons of the Revolution — that was the organization founded in the Long Room where Washington made his famous speech, you might recall. The Long Room is currently the museum’s most popular exhibit, a recreation of an 18th-century public dining room based on tavern keeper estates during the time period.

Other exhibits at the museum include:

Every year over 25,000 people visit the museum. I definitely recommend adding it to your tour of NYC if you have the time.

COVID-19 note: It’s typically open seven days a week, but current COVID hours are Wednesday-Sunday from 1 p.m.-6 p.m. Tickets are $7 for adults and $4 for seniors, students and children under 18. All of the tickets are timed in half-hour slots to reduce crowd levels.

What to Do Near Fraunces Tavern 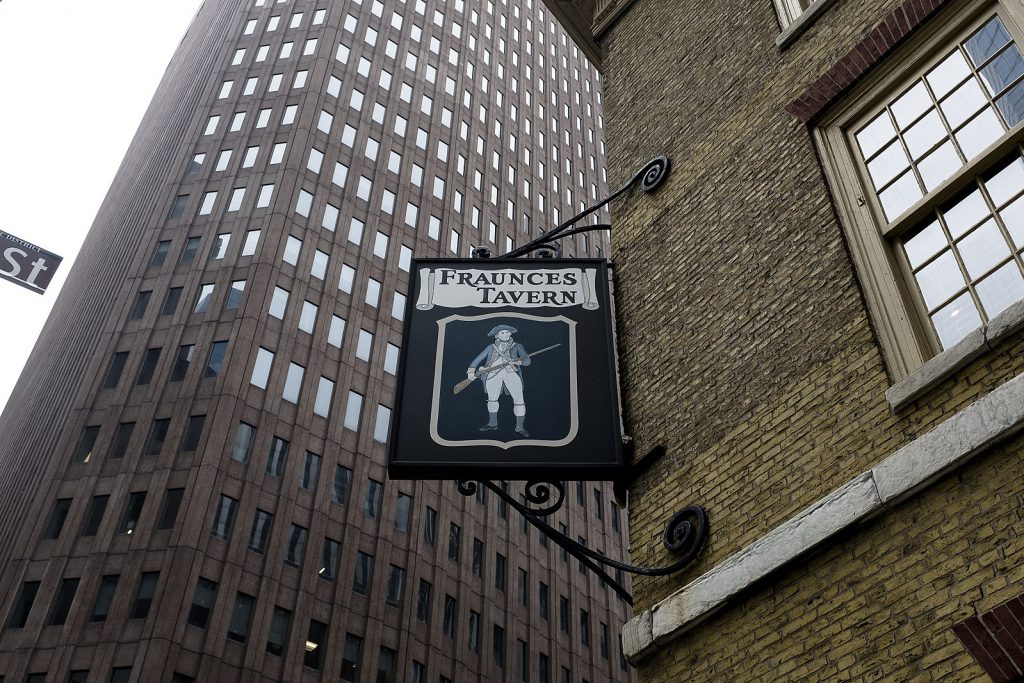 Just around the corner from the tavern is Stone Street, a historic block filled with restaurants and Dutch Revival architecture. The block is covered in cobblestone and blocked off from cars, so visitors are able to walk around freely.

If you’re only interested in the museum at Fraunces Tavern, Stone Street has plenty of alternative dining options — Italian, barbecue, even themed bars.

Just a five-minute walk from Fraunces Tavern is Battery Park, the southernmost point in Manhattan. From the park you can get a great view of the Statue of Liberty and Ellis Island. If you’re interested in seeing both in person, you can buy your ferry tickets inside Castle Clinton.

Looking for the reason Lower Manhattan is called the Financial District? Well, your answer is at the New York Stock Exchange. The trading that happens inside this building can be traced back over 200 years in New York City history. Today, the building is one of the city’s most influential landmarks and is worth the walk to see in person. We’d be happy to show you the way (and give you the insider scoop) on our walking tour of Wall Street.

It may be overshadowed by the stock exchange, but Federal Hall stands proudly as a famous monument in its own right.

The original Federal Hall was home to George Washington’s inauguration, a U.S. sub-treasury, and the creation of the Bill of Rights. All of these events are chronicled in the free museum inside.

Dining with History at Fraunces Tavern 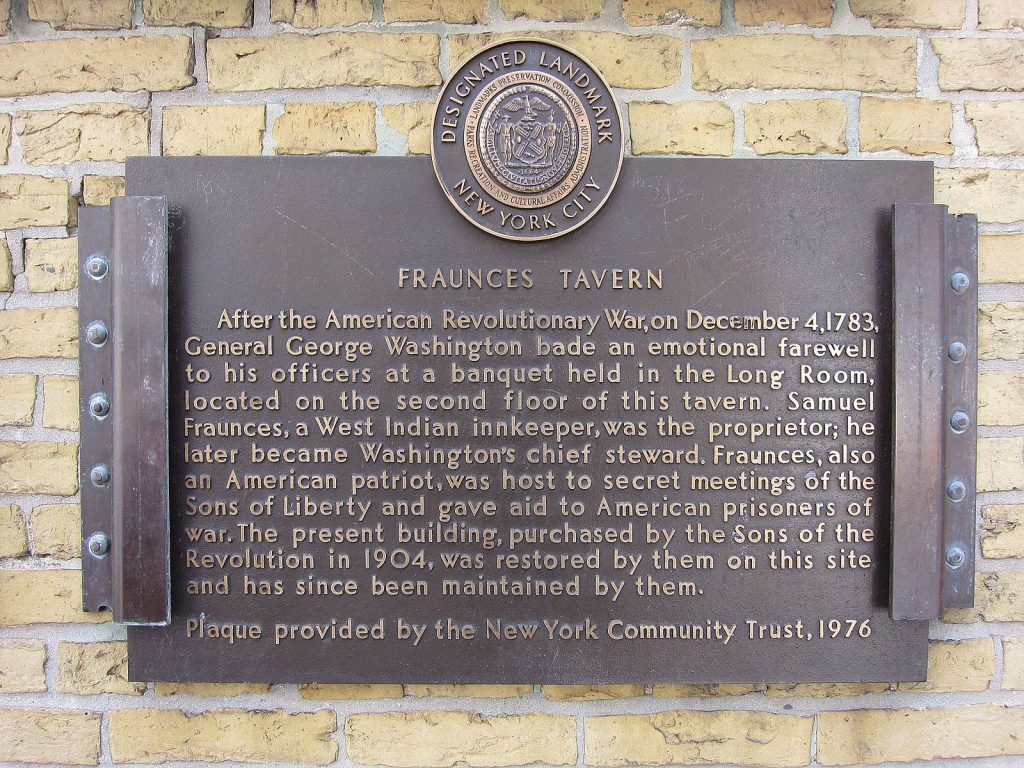 It’s rare in New York City for a landmark to still serve its original purpose — even rarer for the history of the building to be preserved inside.

When you dine at Fraunces Tavern, you’re not just sitting with your friends and family. You’re sitting in the middle of history, in some ways, alongside the thousands of people who have dined there before you. And many of these are individuals who went on to change the city and even the country.

Of course, there’s a lot more history in the Financial District beyond Fraunces Tavern. Learn all about it with one of our experienced guides who’s a Wall Street insider and knows this district well. We’ll share secrets and stories of the New York Stock Exchange, the Federal Reserve, and Wall Street today. It’s the perfect way to spend your day before visiting the tavern.