How NYC’s Lower Manhattan Streets Got Their Names 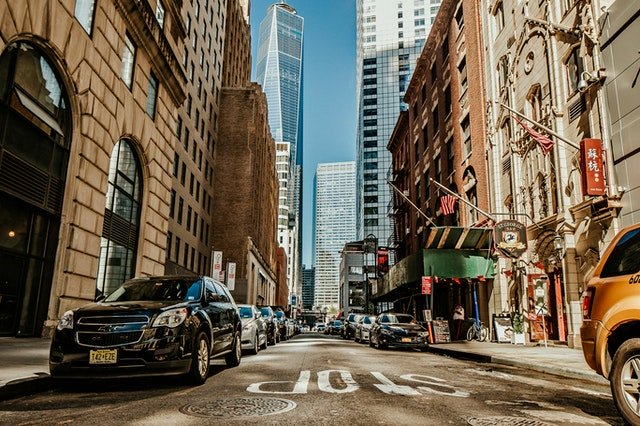 It’s no secret that New York is a pretty easy city to navigate. At least, Manhattan is. Most of the streets are numbered, and almost the entire island is laid out in a grid.

As an NYC tour guide, I know more than the average New Yorker about some of this fascinating history, so I’m here to tell you all about it. In this post, I’ll share how some of those streets in the Financial District got their names and share some of the cool moments these streets have witnessed throughout history.

The name Wall Street comes from an actual wall that was built by the Dutch settlers in Lower Manhattan. After coming over from Europe in 1624, the Dutch built the wooden plank wall in the 1640s to protect their land from Native Americans, pirates, and, most importantly, the British.

It ran from the east to west end of Manhattan, along modern day Wall Street, but was only about 10 feet tall. Even after the British took the territory of New Amsterdam in 1666, they kept the wall around. It wasn’t torn down until 1699.

As you walk along Wall Street today, you can see rectangular wood block pavers in the street, marking the exact location where the wall once stood.

The name Stone Street comes from the simple fact that this was the first cobbled street in New Amsterdam. Under Director-General Peter Stuyvesant, and at the request of many of the street’s residents, the roadway was paved in 1658.

Prior to 1658, the road was known as Breuers Street, due to the large number of breweries on the block. After the British takeover of New Amsterdam, they renamed it Duke Street, but eventually switched back to Stone Street.

Unfortunately, most of the original buildings along Stone Street were destroyed in the Great Fire of 1835. In the late 1900s, the street was restored, and today it’s a picturesque block of outdoor eateries surrounded by Dutch revival architecture.

Guide tip: If you’re here, stop by Adrienne’s for some classic Italian food. They have the best thin crust pizza!

Like many streets in Lower Manhattan, Pearl Street started out as a path for cattle and livestock. The name comes from the English translation of Parelstraat, the Dutch name for the roadway.

The reference to pearls was due to the number of oyster shells that would wash up along the eastern shore of New Amsterdam. In fact, when Manhattan was first discovered by the Dutch, it was estimated that almost half of the world’s oyster population was in New York Harbor (220,000 acres of oyster beds). Their pearly white hue made the street very recognizable.

When the British took over, the name changed to Great Queen Street, but like with Stone Street, it switched back to the original name after a while.

Broad Street was originally one large canal, an inlet of the East River surrounded by three-story homes. To resemble their prized city Amsterdam back home, the Dutch settlers built a number of canals throughout the island.

Broad Street was chosen because it was a very wide street (hence the name Broad). Sadly, the canal was later filled in the 1670s because of the amount of trash left behind by produce vendors. It was officially paved as a roadway in 1693.

Travel tip: As you walk along Broad Street today, you’ll see gray stones forming a path in the middle of the street, marking the location of where the canal used to be. Along the path, you’ll also find a timeline of Broad Street engraved in the stone. Snap a photo! It’s a fun piece of NYC history.

While there was one canal on Broad Street, the other was located along present day Beaver Street. It originally was built as two separate tributaries of the Broad Street canal, one half called the Beaver Canal and the other called the Prince Canal.

The Beaver title references the beaver pelts that became one of New Amsterdam’s main exports. The Dutch loved their beaver fur and could often be found incorporating the animal into their clothing.

Beaver Canal turned into Beaver Street in the 1650s.

Fun fact: This is where the first synagogue in New York opened in 1682.

The name Whitehall actually has nothing to do with the Dutch. It was a road in 17th-century New Amsterdam, but back then was known as Marckvelt Street.

In 1657, Peter Stuyvesant built the Governor’s House at the intersection of Pearl and Whitehall streets. When the British took over in 1664, that building became the seat for England’s government. They called it Whitehall after the residence and area in London of the same name.

By 1731, the entire street had become commonly known as Whitehall as well.

In the late 1600s, landfill extended the shoreline about 700 feet further into the East River. What resulted was Water Street, named because it was right along the water (tricky, right?).

During high tide, the waters of the East River would often wash over the roadway, making it necessary to extend the shoreline even further — back in the late 1700s — to present-day Front Street. The hope was that the landfill would hold back the erosion of Manhattan’s shore.

Luckily for us, it worked!

As I mentioned, throughout New Amsterdam there were two canals built, and the one on present-day Broad Street was known as the Princegracht, aka Prince Canal.

Three bridges crossed over the Prince Canal. (Do you see where I’m going with this?) One of them was at the end of Bridge Street, giving the roadway its current name.

When the British arrived, both canals were shut down and covered up. Like the canals, the bridge was disbanded and became just an average street.

Broadway is the oldest north-south thoroughfare in New York.

Fun fact: It’s also one of the longest streets in the world!

Originally, the path of Broadway was known as the Wickquasgeck trail — a seasonal migration route for Native Americans. It travelled through miles of swamps and rocks along the length of Manhattan. When the weather was warm, the natives would head south to live along the water and then escape to the warmth of the dense trees up north in the winter.

This carved path eventually formed the basis for the main road in New Amsterdam. It was widened slightly and called Heeren Straat, meaning “Gentlemen’s Way.” Some also referred to it as “High Street.”

After the British takeover, they renamed it “Broadway” because of how wide it is.

What’s in a name — in Lower Manhattan?

As we know, New York is always growing and changing. But walking around Lower Manhattan is almost like stepping back in time, especially when you consider the origins of the street you’re walking on.

Discovering the narrative behind each street name is only one small piece of the puzzle.

Interested in learning more about the Financial District in Lower Manhattan? Join us on a walking tour! Our expert guides will share plenty of fascinating stories about one of the most historic and influential areas of Manhattan.

If you want to explore beyond the Financial District and see Ground Zero, we recommend a walking tour of Lower Manhattan.

There’s so much to discover in this incredible city. We can’t wait to see you!